know more about us 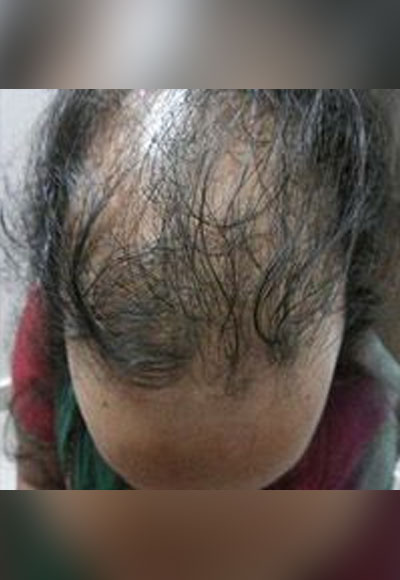 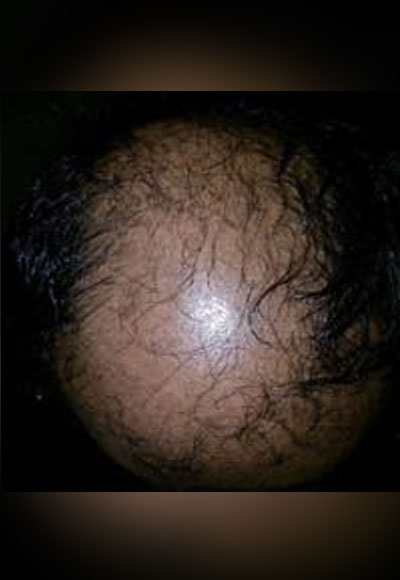 It is also called Androgenic Alopecia –AGA or Male Pattern Baldness –MPB. This is a type of hair loss that develops in most of the men at some stage. It usually takes 15-25 years to go bald. However some men go bald in fewer than five years.
The hairs begin to thin at the side (temples). At the same time , the hairs starts becoming thin on the top of the head. A bald patch gradually develops in the middle of the scalp. The receding sides and the bald patch on the top gradually enlarge and join together, leaving a patch at the front. A rim of hair is often left around the back and sides of the scalp. In some men , this rim of the hair also thins and goes to leave a complete bald scalp.
Nearly all men have some baldness by the time they are in their 60s. The age doesn’t matter in many cases. About three in ten of 30 yrs olds and half of 50 years olds are quite bald. Some females also develop a similar type of hair loss, mainly at the crown. Baldness in women is much more common after the menopause.

All the three doshas Vata , Pitta and Kapha along with blood are involved in the etiology of “Khalitya”. Excessive use of the incompatible foods which vitiates the three doshas and blood are the common causative factors for the loss of hairs.
The classic Ayurveda states that the Vitiated Vata and Pitta dosha approaches to the Romkupas ( Hair Follicles) and uproot the hair followed by their blocking by the Rakta dhatu and Kapha dosha , thus preventing the growth of the new hair and causing the gradual loss of the hairs from the scalp. The person who have the genetic predisposition “ Kha Vaigunya” are at the higher risk of developing “ Khalitya Roga”.
Hair is made in the hair follicle which is like tiny pouches just under the skin surface.  A hair normally grows from each follicle for about three years. It then sheds and a new hair grows from the follicle. This cycle of the hair growth, shedding and new growth goes on throughout the life. So the things that affect the alopecia are

Male hormones abnormality is also very important cause of these changes. The level of the male testosterone  hormone is the cause of the baldness. Hair follicles convert the testosterone into another hormone called Dihydrotestosterone –DHT. Di Hydro Teatosterone is the hormone that shortens the growth phase (Anagen) of the hair. Also an increases level of DHT causes the hair follicle to harden which prevents blood circulation and supply of nutrients to the hairs which eventually leads to the hair fall. The affected hair follicles becomes more sensitive to DHT , which causes the hair follicles to shrink. It is not clear so far that why different hair follicles are affected at different times to make the hair loss process gradual and why only scalp hairs are affected and not the other body hairs of beard or armpit.

HAIR  LIFE  CYCLE
It is divided into three Phases
ANAGEN – GROWTH PHASE
In this phase the hair grows at the rate of 1cm/month. The duration of this phase could be anywhere between 2 to 7 years. At any point, about 80- 85% of all hairs strands are in this phase. This phase is the longest for the people with healthy hairs.
CATAGEN – TRANSITION PHASE
This is the stage which lasts about 2 to 3 weeks. It signals the end of the hair’s active growth.
TELOGEN – REST PHASE
In this stage the hair strands is shed. Almost 15-20% of the hair on the head at any given point of time is in this phase.

THERE ARE SEVEN TYPES OR STAGES OF HAIR LOSS

It this type the hair loss may be a concern as a possible indication of the future hair loss. However, this hair loss condition does not always move to other extensive types of hair loss.

Type- 2
The U Shaped front hairline with slight recession.

Type -3
This is the recession which is more pronounced and may be more difficult to cover. The complete examination of the entire head and starting the medicines at once is recommended. So one should go for the permanent solution of the problem.

Type -4
The starting of thinning of the hairs along with the previous condition as in type 3. The thinning occurs in the crown area and starts increasing gradually.

Type-5
Prominent hair loss in front and crown area. Needs the suggestion of the doctor without delaying.

Type-6
The recession appears more extreme and fully connects with the hair loss in the crown.

Type – 7
The hair loss becomes very extent at this stage. The stage is hard to treat but one should be dedicated for the doctor because results come in delay.

You may also look...

Eczema or Dermatitis is a group of skin conditions, which can affect all age groups. Eczema is one of the commonest reasons for dry, sensitive skin, taking its name.

Intensive Treatment offers all the proved traditional Ayurvedic Treatments based on the concept of Panchakarma by our chief doctor.

According to Ayurveda Vitiligo is known as  White Leprosy : SHIVTRA:  KILASA . In modern it is known as Vitiligo or Leucoderma.